Dolphins' Tua Tagovailoa puts Tyreek Hill's Bengals rival on notice: 'Know that he is getting the ball'

There’s one matchup in the game between the Miami Dolphins and Cincinnati Bengals that almost seems like a WWE skit heading into Thursday night.

Dolphins wide receiver Tyreek Hill stared directly into the camera after his team’s win over the Buffalo Bills on Sunday and told Bengals cornerback Eli Apple that he is coming for him.

"I can’t wait to go against Eli Apple. I owe you, boy. I owe you. I’m here. The cheetah’s here," Hill said smiling directly into a camera. 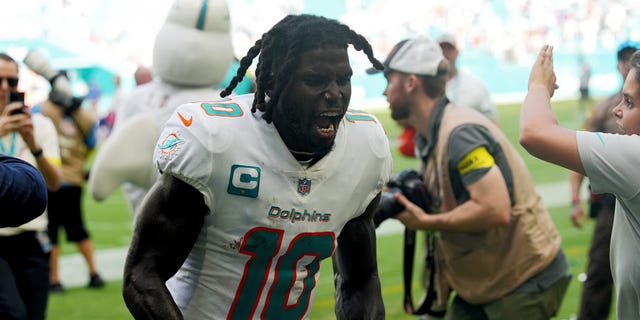 That hype carried throughout the week, and it had to fall upon the man that could give Hill what he wants: Tua Tagovailoa. Seems the Dolphins’ quarterback will oblige if Hill gets the matchup he wants at the line of scrimmage.

"If Tyreek is matched up with him and we call a play for Tyreek and it’s one-on-one, I’m giving Tyreek a shot, just know that he is getting the ball," Tagovailoa told reporters on Tuesday.

Of course, Tagovailoa said he won’t compromise the offensive game plan just to feed Hill. Head coach Mike McDaniel won’t let that be the case either.

But where does the beef come from? Let’s go back to the AFC Championship Game in January when the Bengals and Hill’s former team, the Kansas City Chiefs, battled to see who would end up at the Super Bowl.

At the end of the first half, Apple made a clutch goal-line tackle on Hill to stop the Chiefs from scoring. Eventually, the Bengals came back and punched their ticket to Los Angeles. 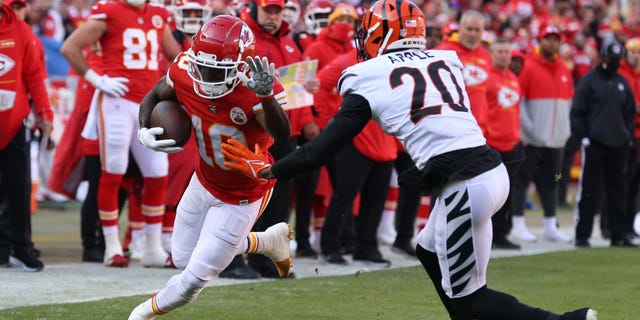 Apple took to Twitter after the game, calling Hill a "baby," to which the latter and his teammate, Mecole Hardman, took exception with their own responses.

Apple snapped back with sarcasm, saying he’d buy Super Bowl tickets if they wanted to come out to watch.

That’s why Hill owes Apple, but his Bengals teammates won’t let him go into battle without some backup.

"I don’t know if Eli got him tickets to the Super Bowl last year or not," safety Jessie Bates III said. "I think that’s probably why he’s a little upset.… If somebody comes after Eli, he comes after all of us, we’re all up for the challenge."

Hill has done well with his new quarterback so far this season, totaling 21 receptions for 317 yards and two touchdowns, both of which came in the Dolphins’ Week 2 comeback against the Baltimore Ravens. Hill had 190 yards in that contest.

On Sunday, though, Hill was stymied by the Bills’ defense, tallying two catches for 33 yards.

Apple has been targeted 17 times this season, per Pro Football Reference, allowing 11 completions for 146 yards and no touchdowns. 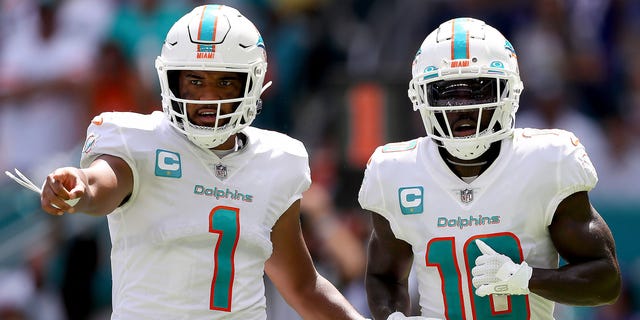 Tua Tagovailoa and Tyreek Hill of the Dolphins in action against the Buffalo Bills at Hard Rock Stadium on Sept. 25, 2022 in Miami Gardens, Florida. (Megan Briggs/Getty Images)

The Dolphins remain one of two undefeated teams in the NFL, as the Philadelphia Eagles join them at the top of the league. The Bengals, on the other hand, picked up their first win on Sunday against the New York Jets.