The Danish men's national soccer team will wear "toned-down" jerseys at the 2022 World Cup in protest of Qatar’s human rights record, including a black alternate jersey that represents "the (color) of mourning."

Hummel, a Danish sportswear brand and longtime kit manufacturer for the Danish national team, released this year’s look on Instagram Wednesday with a message about the design in relation to the host nation, which has been fiercely criticized in the past decade for its treatment of migrant workers. 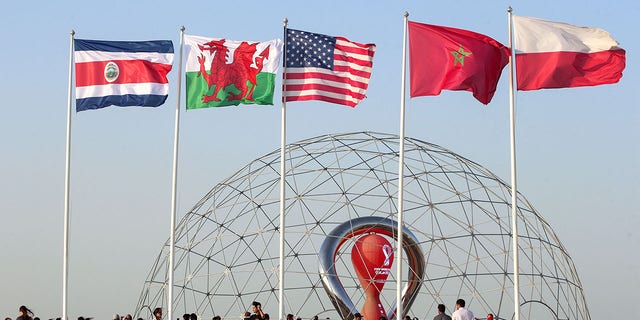 Flags (L to R) of Costa Rica, Wales, the United States, Morocco and Poland, nations that qualified for the 2022 World Cup in the Qatari capital Doha during a flag-raising ceremony of the last remaining countries to qualify June 16, 2022.  (Mustafa Abumunes/AFP via Getty Images)

"With the Danish national team’s new jerseys, we wanted to send a dual message.

"They are not only inspired by Euro 92, paying tribute to Denmark’s greatest football success, but also a protest against Qatar and its human rights record," the post stated.

"That’s why we’ve toned down all the details for Denmark’s new World Cup jerseys, including our logo and iconic chevrons. We don’t wish to be visible during a tournament that has cost thousands of people their lives," the post continued.

"We support the Danish national team all the way, but that isn’t the same as supporting Qatar as a host nation. We believe that sport should bring people together. And when it doesn’t, we want to make a statement."

The Danish Football Association (DBU) has been outspoken about its opposition to Qatar being selected to host this year’s World Cup. 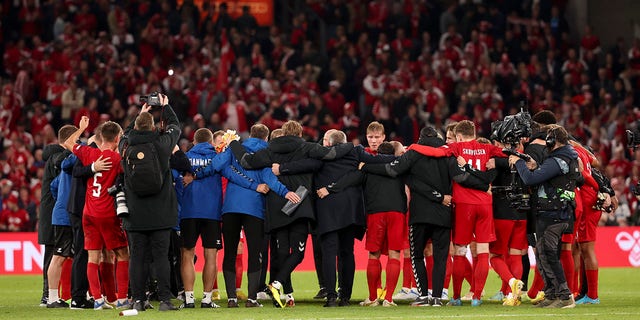 "​​DBU does not agree with the decision to place the WC 2022 in Qatar. We have not voted for it, and we think it is deeply controversial," the group said in a statement on its website, adding it has no plans to boycott the tournament.

"Through critical dialogue and presence in Qatar, DBU will take an active co-responsibility for creating better conditions for migrant workers who work with the running of the World Cup in Qatar."

Hummel also announced Wednesday a third uniform that will be all black, "the (color) of mourning." 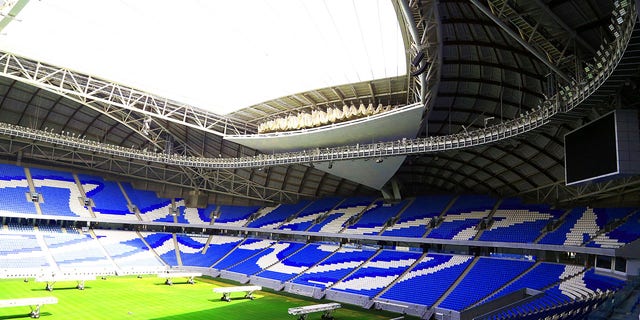 General view of the Al Janoub Stadium, one of the eight venues to host the FIFA World Cup 2022 in Qatar.  (Sidhik Keerantakath/Eyepix Group/Future Publishing via Getty Images)

"The perfect (color) for Denmark's third shirt for this year’s World Cup," the company said in a separate post. "While we support the Danish national team all the way, this shouldn’t be confused with support for a tournament that has cost thousands of people their lives. We wish to make a statement about Qatar’s human rights record and its treatment of the migrant workers that have built the country’s World Cup stadiums."

World Cup organizers in Qatar have previously disputed Hummel's claim of thousands of deaths in construction work during preparations for the Nov. 20-Dec. 18 tournament.