Major League Baseball has been experimenting with pitch clocks throughout the minor league season with the goal of cutting the length of games.

According to officials, the clocks have resulted in the average time of a minor league game being reducing by an average of 25 minutes. The league ultimately hopes this trend translates into the big leagues during the 2023 season.

A deeper dive into the data released by the commissioner's office revealed the average time of a minor game dropped to 2 hours and 38 minutes this season, which ended on Sept. 28. Last season the average game lasted 3 hours and 3 minutes.

At Triple-A, the minor leagues' highest level, pitch clocks were set at 14 seconds if the bases were empty. Pitchers had 19 seconds when runners were on the bases. Single-A and Double-A featured 18-second clocks with runners. 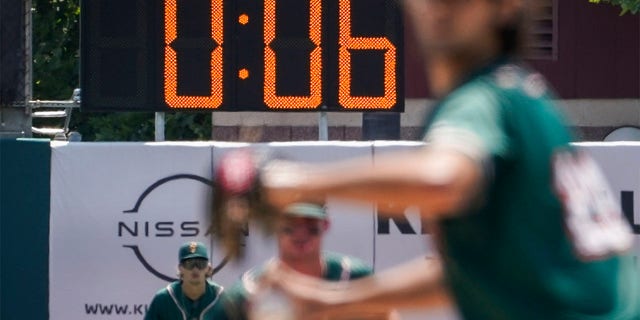 A pitch clock is deployed during a minor league game between the Brooklyn Cyclones and Greensboro Grasshoppers, July 13, 2022, in the Coney Island neighborhood of Brooklyn. (AP Photo/John Minchillo)

Big league games did not incorporate pitch clocks during the 2022 season and games averaged 3 hours and 4 minutes.

MLB announced on Sept. 9 that clocks will be introduced in the major leagues next year at 15 seconds with no runners and 20 seconds with runners.

The players' association was opposed to the league's decision.

Pitchers are penalized a ball for violating the clock.

However, after an adjustment period, violations did decrease throughout the minor league levels. Pitcher violations decreased from an average of 1.73 per game in the second week to 0.41 in week 24.

Under the new rules, pickoff attempts or step offs will be limited to two per plate appearance. The minor league experiment did incorporate this restriction during its recently concluded season.

If a third pickoff throw is attempted and is unsuccessful, the pitcher would be charged with a balk. 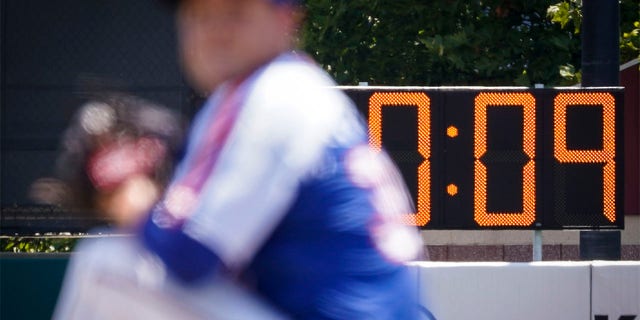 Major League Baseball is considering a pitch clock for next year along with shift limits, larger bases and restrictions on pickoff attempts. (AP Photo/John Minchillo)

In an effort to promote safety, bases were increased to 18-inch squares from 15, which reduces the likelihood of first basemen being stepped on. 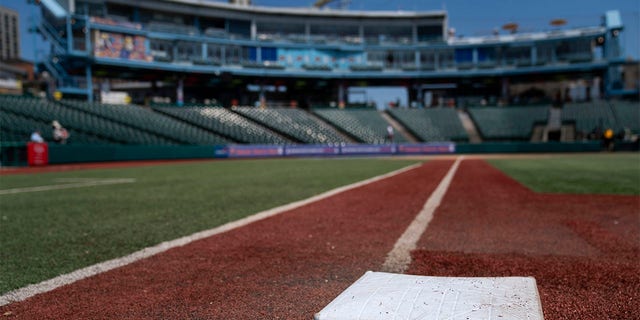 Larger bases are installed on the infield before the Cyclones-Grasshoppers, game, July 13, 2022, in the Coney Island neighborhood of Brooklyn. (AP Photo/John Minchillo)

Many offensive measurements were relatively stable: runs per team per game increased to 5.13 from 5.11 and batting average to .249 from .247.

MLB’s goal is to eliminate dead time in between pitches and increase the overall action in games.

Chantz Martin is a sports writer for Fox News Digital.