A suspect has been arrested for driving erratically through the Texas State Capitol grounds, leaving a trail of damage, according to the Texas Department of Public Safety.

Photos taken by The Associated Press Thursday morning show a broken perimeter fence, shards of glass, a smashed sign and tire tracks along the east entrance to the Texas State Capitol grounds in Austin.

The incident happened around 10 p.m. Wednesday, when officers saw an unauthorized vehicle drive through an iron gate on the east entrance and through a grassy area in the direction of the south steps, where the driver collided with a bollard and fixture, according to a Texas DPS statement. 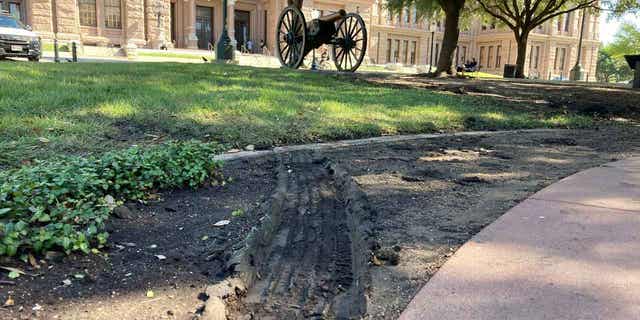 A suspect has been arrested for recklessly driving through the Texas State Capitol grounds. The incident took place on Wednesday night. (AP Photo/James Vertuno)

The suspect was arrested and booked on charges of criminal mischief and reckless driving, according to the statement.

Earlier Thursday, a state department of public safety officer was on scene inspecting the damage. Hours later, yellow tape marking a police line had been placed along an estimated 10 feet of broken fencing, but no officers remained on scene along the path of light tire marks that stretched well into the grounds.

The public safety department said the incident is under investigation by the Capitol Region Criminal Investigation Division.