FIRST ON FOX: A move by the Department of Justice to block Arizona’s election law that seeks to stop non-citizens from voting has sparked a fiery response from the state’s attorney general -- who is questioning whether the agency is seeking to undermine sovereignty.

"In addition to free rooms and transportation for those illegally entering our country, the DOJ now wants to give them a chance to vote," Attorney General Mark Brnovich told Fox News Digital after the DOJ announced it was suing the state on Tuesday. "It's another round of Brnovich v. Biden.  I will see you in court…again."

The DOJ’s Civil Rights Division wrote last month to Brnovich, alerting him to the plan to file a lawsuit against the Grand Canyon State over its recently enacted voting law, HB 2492.

That law requires those registered to vote to also provide documentary proof of citizenship, as part of a push to stop non-citizens from voting. The DOJ says that the 1993 National Voter Registration Act bars officials from denying individuals the ability to vote if they fill out the federal voter registration form correctly -- with no other requirements allowed.

"Those restrictions [in HB 2492] violate Section 6 of the NVRA, which requires Arizona to ‘accept and use’ a completed and valid Federal Form to register qualified applicants to vote in all elections for federal office," the letter by Assistant Attorney General Kristen Clarke says.

"Such applicants need not provide additional documentation to prove their citizenship to be registered to vote in federal elections," she says.

The letter expresses the hope to resolve the matter "amicably and avoid protracted litigation" -- therefore the DOJ says it will delay filing the complaint in order to see if it is possible to settle the issue. 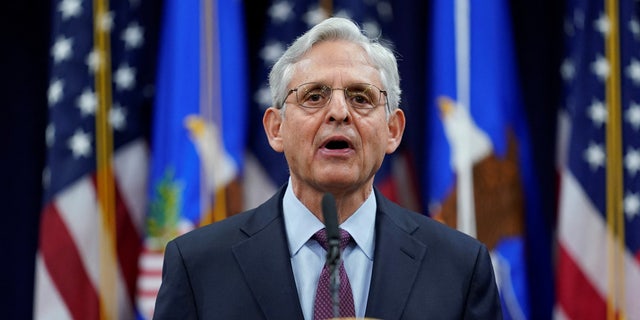 U.S. Attorney General Merrick Garland speaks at the Department of Justice,  in advance of the one year anniversary of the attack on the U.S. Capitol, in Washington, Wednesday, Jan. 5, 2022.  (Carolyn Kaster/Pool via REUTERS)

But Brnovich’s July 1 response obtained by Fox News Digital, says that he intends to "defend this law to the U.S. Supreme Court if necessary and defeat the federal government’s efforts to interfere with our state’s election safeguards, as I did last year in Brnovich v DNC."

Brnovich went further, saying it was "curious" that the DOJ "would use its resources to challenge a common sense law in Arizona designed to guard against non-citizen voting, while the Biden administration is simultaneously opening our borders to encourage a flood of illegal immigration."

"Is the federal government attempting to undermine our sovereignty and destabilize our election infrastructure? I hope this is not your intention," Brnovich, who is also running for the U.S. Senate, says.

Brnovich finished the letter by urging the DOJ to "reconsider your pursuit of this misguided suit and to instead recognize Arizona’s constitutional authority to conduct lawful and secure elections."

On Tuesday, the DOJ announced that it had formally filed the lawsuit, calling the bill a "textbook violation of the National Voter Registration Act."

"Arizona has passed a law that turns the clock back on progress by imposing unlawful and unnecessary requirements that would block eligible voters from the registration rolls for certain federal elections," Clarke said in a statement. "The Justice Department will continue to use every available tool to protect all Americans’ right to vote and to ensure that their voices are heard."

Adam Shaw is a politics reporter for Fox News Digital, with a focus on immigration. He can be reached at adam.shaw2@fox.com or on Twitter: @AdamShawNY