While on-the-ground in Uvalde, Texas, Rep. Tony Gonzales, R-Texas, told "Fox News Live" Saturday he spoke to a wounded officer who told him police response units were "scrambling" to find a tool to open the school door to get to the gunman. He learned the locked steel door only opened outward, "not inward," making it more difficult to break down.

TEXAS LT. GOV. DAN PATRICK ON UVALDE POLICE RESPONSE: ‘WE WERE NOT TOLD THE TRUTH’

REP. TONY GONZALES: I spoke directly to one of the initial officers that engaged the situation. And he took fire, he got wounded, and what they were telling me, because I'm asking, 'Hey, why didn't you get in sooner? Walk me through that.' And he goes, 'Look, here's the deal, Tony. It was a steel door and it was locked. And it would go outward, not inward. Meaning I'd have to pry it open with a can.' He goes, 'We didn't have those kind of tools. We were scrambling, looking for it.' 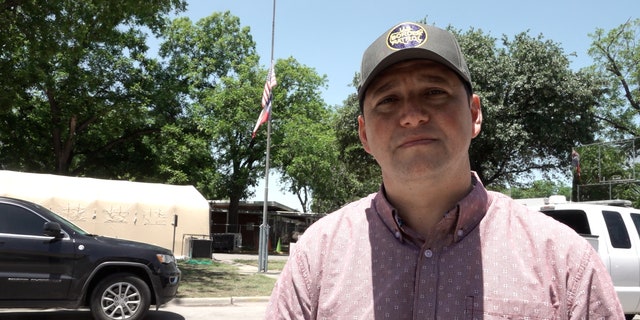 Rep. Tony Gonzales, R-Texas, claimed police couldn't enter Robb Elementary School sooner because officers were "scrambling" to find a tool to break down the steel door which only opened outward, on "Fox News Live" Saturday, May 28, 2022.

There was actually a game warden that had a crowbar and a hammer that they ended up going, eventually, they find a key. But what I'm getting at is these folks wanted to get in there as fast as they possibly could. These were their children. These were their neighbors.

WATCH THE FULL INTERVIEW BELOW