Pulisic admits prominence on US, Chelsea sometimes a burden

Christian Pulisic has been on a roller coaster.

America's top player won the Champions League, then was sidelined for nearly two months. He battled for inclusion in Chelsea's lineup and been shifted from his usual wide midfield role to center forward and even wingback.

"It’s been up and down this year, for sure," he said ahead of the United States' frosty World Cup qualifier against El Salvador on Thursday night. "Not exactly where I want to be and how I want things to be right now. But, yeah, I’m just going to keep going."

Wearing long trousers and gloves, a few topped by ski hats, U.S. players practiced Wednesday in 10 degree weather (minus-12 Celsius), a contrast to the 72 degrees (22) in San Salvador for the opening 0-0 draw on Sept. 2.

They face three games in an eight-day span, two of them at home, and with two wins would move into commanding position to clinch a berth during the final three qualifiers in March. Canada leads North and Central America and the Caribbean with 16 points, one ahead of the U.S., with Mexico and Panama at 14 points. El Salvador is seventh with six.

U.S. coach Gregg Berhalter has shifted to restrained confidence, admitting that in September he was "a little bit more bold with my prediction."

"They’re going to be pressing really high, and we’ve got to move the ball quickly," he said of El Salvador. "They were the best pressing team in the first eight games."

Among the few holdovers from the failed U.S. 2018 World Cup effort, Pulisic is the American centerpiece.

Still just 23, the Hershey, Pennsylvania native became the first American to appear in and win a Champions League final, proudly wearing a "USA" hoodie during the postgame celebration in Portugal last May.

Pulisic was sidelined in August by a positive COVID-19 test and injured his left ankle at Honduras in the third qualifier on Sept. 8. He was out until Nov. 2 and has started just seven of Chelsea's last 11 Premier League matches. He’s been moved around the field by manager Thomas Tuchel, his only goals have been against Crystal Palace in the opener, Leicester in November and Liverpool on Jan. 2.

"It’s tough," Pulisic said. "I haven't always been playing in the positions I want to play in. But I think it’s a good quality to be versatile and be able to play in all kinds of positions and have different strengths on the pitch. So, yeah, I’ve learned a lot and I think I’m ready to hopefully be in a spot in the next couple of games that I’m more comfortable in." 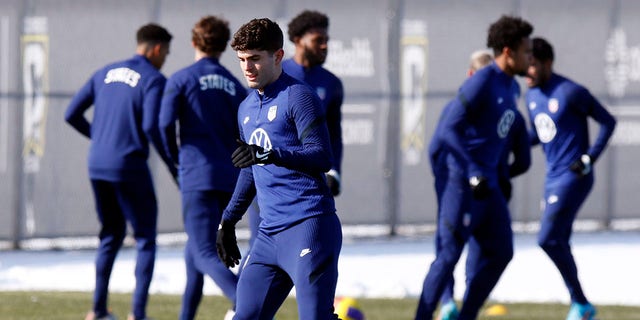 A wide attacker in Berhalter's 4-3-3 formation, Pulisic returned from the injury to enter in the 69th minute against Mexico in November, scoring the go-ahead goal on his first touch in a 2-0 win. A month later, he won his third U.S. Player of the Year award, tied with Kasey Keller and Clint Dempsey for second behind Landon Donovan's four.

"I just love the fact that Christian is fighting, is fighting to be on the field," Berhalter said. "And whether he plays forward, his natural position is a winger or withdrawn attacking midfielder, or if he plays wing back, he’ll do whatever it takes to be on the field. I think that’s the mark of character."

Pulisic, Weston McKennie and Tyler Adams could start together Thursday for only the second time, the first since an exhibition against Ecuador in March 2019.

"There's two sides to me," Pulisic said. "There’s the soccer side and then there’s the person side. So the person side is even more important for me, and I’m doing all right in that sense. But, yeah, it’s a lot sometimes.

"It’s always when I come to the national team, it’s: How are things at Chelsea? How — what’s this, what’s that? And, yeah, it’s tough. It's tough. It’s definitely played a lot on me, and mentally it’s been difficult at times. But I’m always very excited to come back with the national team and sort of step away and get to enjoy it."

Next up will be a match Sunday at Canada and a Feb. 2 matchup against Honduras at St. Paul, Minnesota.

"We’re in a good position," Pulisic said, "and by the end of this window, we could be in a great position."

Notes: Matt Turner is "the clear starter" in goal, according to Berhalter, with Zack Steffen remaining in Manchester, England, for back treatment. There has been speculation Arsenal could try to acquire Turner from New England. "He's able to tune that out," Berhalter said. ... Delayed by flight cancellations in Istanbul, D DeAndre Yedlin was to travel to Columbus on Wednesday. ... Berhalter said Antonee Robinson is his starter at left back.