Fresh questions on what Fauci, government knew about COVID origin

Good morning and welcome to Fox News First. Here's what you need to know as you start your day

Fox News Special Report outlines fresh questions on what Fauci, government may have known about COVID origin
Fresh questions are being raised about what American scientists and federal health officials knew about the origins of the coronavirus and whether conflicting evidence was suppressed and hidden from the public.

On Tuesday night’s episode of "Special Report with Bret Baier," Fox News dove into the early days of the coronavirus pandemic and explored documents that said Dr. Anthony Fauci, director of the National Institute of Allergy and Infectious Diseases, was warned early on that the virus may have originated in a Wuhan lab.

According to the timeline of events laid out by Baier, Fauci was told on January 27, 2020 that his NIAID had been indirectly funding the Wuhan lab through EcoHealth -- a US-based scientific non-profit that had been working with novel coronaviruses.

On January 31, Dr. Kristian Andersen, a noted virologist at the Scripps Lab, privately told Fauci that after discussion with his colleagues some of COVID-19’s features look possibly engineered and the "genome is inconsistent with expectations from evolutionary theory."

Andersen added that the situation needed to be looked at more closely, at which point Fauci organized an all hands on deck conference call with colleagues where he was told that risky experiments with the novel coronavirus may not have gone through proper biosafety review and oversight. CLICK HERE FOR MORE ON OUR TOP STORY.

Russia expert lays out Putin's 'menu of options' regarding Ukraine, warns US vulnerability being tested
Fox News contributor Daniel Hoffman explained during comments to Fox News Digital on Tuesday that Russian President Vladimir Putin has a "menu of options" for taking hostile action toward Ukraine.

Putin, who has amassed 100,000 troops on the Ukraine border, is also using the American response to his actions to discern the vulnerabilities of the United States, warned Hoffman, who had a distinguished career with the Central Intelligence Agency, where he was a three-time station chief and a senior executive Clandestine Services officer.

"He could blockade the Black Sea and the Sea of Azov," Hoffman said. "He could launch a full-throttle assault on Kyiv, which we would obviously see. He could also use his Spetsnaz guys, special forces guys — and they're inside Ukraine already — to topple this Zelensky government. That's also an option."

Hoffman went on to point out that Putin could also choose to inflame the ongoing war in Donbas, a region in southeastern Ukraine.

"But right now, he's getting a lot out of having deployed those 100,000 troops," Hoffman noted. "This is not a losing proposition for him. It's a win for him right now." CLICK HERE FOR MORE.

Man shot inside NYC hospital, suspect remains at-large, police say
A manhunt is underway in New York after a gunman shot a man Tuesday inside an emergency room of a hospital in the Bronx. 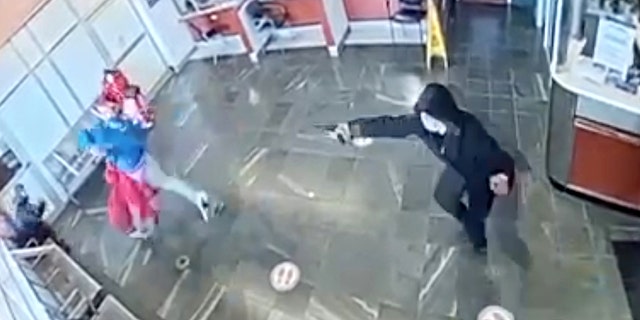 The victim was described as a 35-year-old male. He was in a line to speak with a hospital representative at Jacobi Medical Center. He was shot in the arm and the gunman fled the scene, CBS 2 of New York reported.

"This was a cowardly act in a space where New Yorkers come for healing and care. Our health care heroes swiftly took care of the shooting victim and took actions to protect the other patients in the waiting room. Our immediate focus is on caring for the patient and ensuring the safety of our staff. We are working closely with the NYPD as they conduct their investigation," the hospital said in a statement after the shooting.

The attack was targeted, according to the NYPD, CBS 2 reported.

"Today’s shooting is a sad reminder that we need to address the devastating problem of gun violence in our communities," Bronx Borough President Vanessa Gibson tweeted after the shooting. CLICK HERE FOR MORE.

Audrey Unverferth, editor-in-chief of a conservative paper at the University of Chicago, was a guest on "Tucker Carlson Tonight" Tuesday where she demanded that her college end an "unethical" and "anti-science" booster mandate.

"There was just no excuse for this latest mandate – it's absolutely absurd," Unverferth told host Carlson. On Dec. 20, the university announced that students must receive a COVID-19 booster shot "once they are eligible, unless they have an approved exemption."

Not signed up yet for Fox News First? Click here to find out what you're missing.

This edition of Fox News First was compiled by Fox News' Jack Durschlag. Thank you for making us your first choice in the morning! We’ll see you in your inbox first thing Thursday.