An Embraer Legacy 600 plane owned by Rivers state government and bought in 2003 by Governor Peter Odili, was sent to Germany in 2012 for repairs.

The Amaechi administration that sent the plane did not make efforts to retrieve it. It simply abandoned it.

The scandal about the abandonment was exposed by Governor Nyesom Ezenwo Wike, who claimed his government learnt about the plane via some intelligence.

It was the second state asset of the Amaechi era that Wike had stumbled upon. Last year October, Wike revealed that a gas turbine generator unit and accessories ordered by the government was abandoned in The Netherlands since 2012.

The scandal emerged at the meeting of the state executive council, where it was resolved that the contractor, SAIPEM Contracting Nigeria Limited be sued.

On the aircraft, the governor, said it was unconscionable for the Amaechi administration to have surreptitiously taken a state owned asset to Germany and abandon it, without any documentation.

Wike, who led a delegation of Rivers leaders to General Atomics Aerotec in Munich, Germany, where the aircraft had been parked, said efforts to repair and retrieve the aircraft has cost the State government over €3 million.

Speaking during a meeting with the General Manager, Business Development, General Atomics Aerotec, Markus Froetschi, Governor Wike explained that his administration in a bid to recover State assets, had through intelligence discovered that the Embraer Legacy 600 jet purchased by the Dr Peter Odili’s administration was in Germany.

“When we came into office in 2015, we never had an idea that our plane was in your facility. It was a matter of asking questions before we got the information that Legacy 600 belonging to our State is in RUAG, before General Atomics.

We tried to make contact with you and which you obliged. So, we want to sincerely thank you for not hiding anything from us, because it is the property of the State government.

“This plane was bought in 2003 by the government of Dr Peter Odili, and by 2007 he had handed over to the next government which was my predecessor’s, now, Minister of Transportation, Rotimi Amaechi.

“While he was in office, by 2012 this plane was brought here. Reasons we do not know.”

Governor Wike said there is no document indicating that the aircraft was flown to Germany.

“The issue is, why was there no documentation to let the incoming government to know that we have this facility and we sent it to RUAG for inspection. A

“Again, I do know from experience that inspection of such facility does not take more than six months.

Governor Wike, said he had to travel to Munich, Germany with a state delegation to prove that the Legacy 600 aircraft has been discovered and about to be returned to the State government.

The General Manager, Business Development, General Atomics Aerotec, Markus Froetschi, said the aircraft was brought to Germany by the immediate past administration and abandoned since 2012.

He expressed delight that Governor Wike took the initiative to repair and return the aircraft to Nigeria for use by the State government.

According to him, his company will be done with general maintenance work and deliver the aircraft to the State government by March.

The Speaker, Rivers State House of Assembly, Ikuinyi-Owaji Ibani, said he was elated that the aircraft has been recovered by the State government. According to him, State lawmakers will continue to support every effort to recover all government assets and property.

Similarly, the Deputy Speaker, Rivers State House of Assembly, Ehie Ogerenye Edison, described the abandonment of the aircraft in Germany as administrative recklessness.

“We are surprised that this is more than seven years that the aircraft has been here. Their intention we cannot say for such, but it shows administrative recklessness, and worst of all, there is no proper documentation to show Rivers government as at then, meant well for Rivers people.”

Chairman of Ikwerre Local Government Area, Samuel Nwanosike, said considering the brazen manner by which the Amaechi administration sold state valuable assets to their cronies, it was obvious that the Legacy 600 was surreptitiously flown to Germany to be converted to personal use. 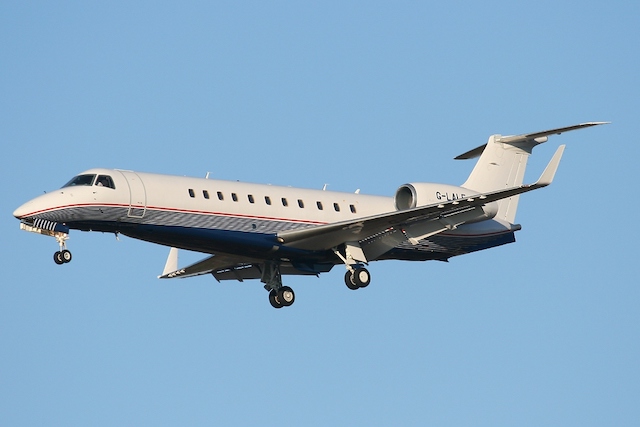 Embraer Legacy 600 jet in the air

It features added range via extra fuel tanks in the tail behind the baggage compartment and forward of the wing, winglets, and an extensive drag reduction program.

The Legacy Shuttle can seat 19 to 37 in airline-style seats but without the range.

The Legacy 600 competes on the upper end of the small to mid-sized range of business jets and is considered a “Heavy Jet” aircraft.

It has nearly the opposite design progression as the rival Canadair Challenger. The Legacy 600 was derived from the established ERJ family of regional jets, while the Canadair Regional Jet was developed by Bombardier from the Challenger business jet.

Both lines of aircraft are competitors.

Embraer has since launched an extensive lineup of business aircraft, from the entry-level Phenom 100 to the Lineage 1000, a bizliner version of the company’s 100-seat E190.