In her "Ingraham Angle" commentary on Monday, host Laura Ingraham said President Biden and the Democrats are "stumbling on the warpath" as they frantically seek a distraction from Biden's failing presidency.

As inflation and crime soars, coronavirus continues and polls tank, Biden's political and media allies are desperate to change the subject, she said.

"More than a month ago, President Biden assured a very war-weary nation that putting troops in or around Ukraine was not on the table. Well, now it looks like that's right up there with the other promises he made, like if you get vaxxed, you can go back to normal and just 100 days of masking," she said.

"Anyone paying attention to Biden's presser last week heard the sounds of the war-drums beating [as] the media desperately wants to get off the raging crime, raging COVID, raging inflation story that's driven Biden to another new low in the polls today."

Ingraham added that some of Biden's media allies couldn't do a better job of trashing and undermining the United States if it were Vladimir Putin himself. 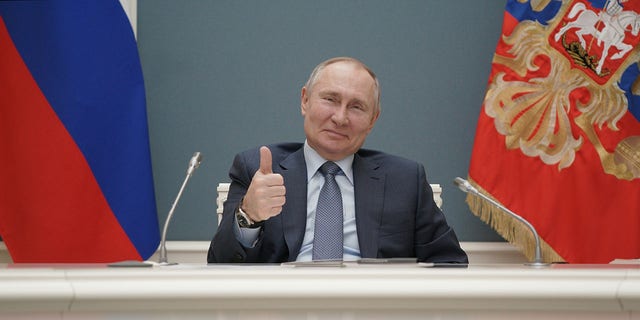 FILE PHOTO: Russian President Vladimir Putin gives a thumbs-up as he attends a foundation-laying ceremony for the third reactor of the Akkuyu nuclear plant in Turkey. (Sputnik/Alexei Druzhinin/Kremlin via REUTERS  ATTENTION EDITORS - THIS IMAGE WAS PROVIDED BY A THIRD PARTY./File Photo)

"Putin doesn't even need to spend money crippling Washington, D.C. when our own press corps does it for free," Ingraham remarked.

"The media has helped Putin by supporting policies to increase the price of oil and gas. Now, most Americans understand that cheap energy is bad for Russia. But the media doesn't want Americans to have cheap energy. They've done everything possible to stop drilling and to smear the fracking revolution that promises energy independence."

"Soaring energy prices are helping Putin buy more weapons. The media have undermined our military readiness now for years, we suffered disaster after disaster in Afghanistan, capped by the utter failure to successfully end that war," she continued. 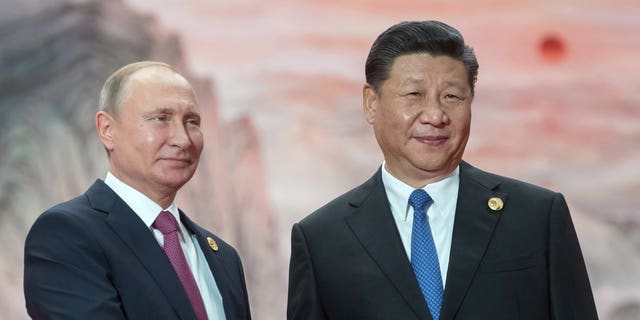 She warned that Democrats and Republican neoconservatives are helping take the U.S. down the same path as the costly and protracted war in Afghanistan that concluded with a deadly withdrawal.

"America cannot and must not dilute the strength she has left on another hopeless crusade urged on by the same people who screwed up in Afghanistan," she said. "Our real threat militarily and economically is the [Chinese Communist Party], which loves it when we squander our resources on pointless foreign ventures and quagmires – it makes them thrilled," she said.

"Of course, the CCP can always count on the America haters, though, to downplay the threat they pose. Two days ago, the New York Times published what can only be described as a fawning personal tribute to President Xi."

She further warned that Senate Minority Leader Mitch McConnell of Kentucky and many of the other Republican leaders lean toward a hawkish perspective.

"If he wants to avoid being thrown out by another populist uprising in 2024, he needs to resist the war machine's temptation," Ingraham said.

"We have enough failed war baggage in the GOP. And for the rest of us, we have to focus on finding leaders in both parties who can build this country up instead of always tearing her down."