Flynn joined a slew of high profile Trump supporters in Washington D.C. for a series of "Stop the Steal" rallies to protest the results of the election, one day after the U.S. Supreme Court rejected a lawsuit by Texas aimed at overturning President-elect Joe Biden's win in four battleground states. Billed by Trump and his allies as "the big one," the failed suit was the latest in a string of defeats for the president's campaign to reverse his defeat.

"The courts do not decide who the next president of the United States will be," Flynn told a crowd of protesters carrying patriotic flags. "We the people decide."

"I will say, there are paths that are still in play ... there's a lot of activity that's still playing out." 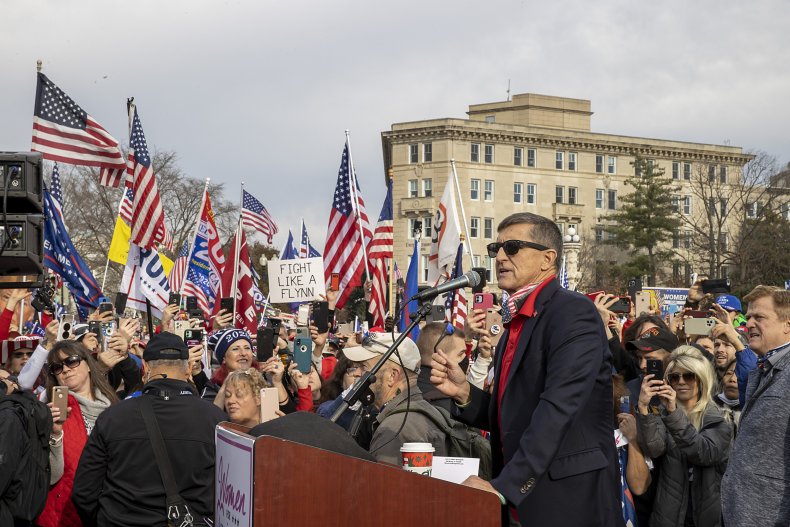 On November 27, Trump issued Flynn a presidential pardon, concluding a prosecution spanning years in the Russia probe that saw his former aide plead guilty twice to lying to the FBI about contacts with a Kremlin ambassador. Flynn had asked to reverse his pleas before the Justice Department attempted to discharge his case.

A few weeks later, on Tuesday, a federal judge upheld the case dismissal, but maintained that Trump's pardon does not prove Flynn's innocence in lying to the FBI.

Flynn told the pro-Trump crowd on Saturday that he was certain that the president will hold onto power. "I will tell you one more time—because I've been asked—on a scale of one to ten, who will be the next president of the United States, and I say Donald Trump. Ten. A ten," he said.

Conservative radio host Alex Jones and MyPillow CEO Mike Lindell were among other speakers at the rally.

Trump's path to overturning the results of the election is now virtually non-existent, with the Electoral College set to officially confirm Biden's victory on Monday. U.S. District Court Judge Brett Ludwig dealt another blow to his campaign as protesters marched today by dismissing his lawsuit seeking to overturn Wisconsin's results.

MAGA supporters, once aligned with the GOP, have been turning against their party for failing to help Trump remain in office. Elsewhere at the D.C. protests today, a large group of demonstrators were chanting "destroy the GOP," and booing Georgia Republican Senate incumbents Kelly Loeffler and David Perdue.

Newsweek reached out to the Trump campaign for comment.