Chance The Rapper faced a backlash after the Chicago emcee tweeted in support of Kanye West’s presidential bid while denouncing Democract Joe Biden.

Chance began by retweeting West’s post and added his own commentary: “And yall out here tryna convince me to vote for Biden. Smfh.”

However, Chance’s response didn’t sit well with many on the platform. The 27-year-old then posed a question to his critics about their overall stance on U.S. democracy.

RAPPER ACTION BRONSON REVEALS HE LOST 80 POUNDS: ‘I DESERVE TO HAVE A HOT BOD’

“Are we pro two-party system?” Chance tweeted before shortly following that up with another question of whether folks were simply “more pro Biden or anti ye [Kanye] and why?”

“I get that you’ll want to reply that you’re just tryna ‘get trump out’ but in this hypothetical scenario where you’re replacing Trump, can someone explain why Joe Biden would be better??” Chance continued.

Chance's detractors claimed that Biden is a much better option to replace President Donald Trump than West – but Chance did not agree, claiming West has provided more for the Black community than Trump or Biden.

West has previously vowed to provide affordable housing and much more support for education in Chicago, which Chance believes West’s focus could expand to the country as a whole if he won the presidency.

Many states require petitions with thousand of signatures to be listed on the ballot as a presidential candidate. As of last week, West had not filed any formal paperwork to run for president and has missed deadlines for a half dozen states, including New York and Illinois, according to Billboard.

CHANCE THE RAPPER HAS SPENT $30G ON POSTMATES SINCE 2014

Chance then hit send on another tweet in which he said he’s “finally got the answer now.” 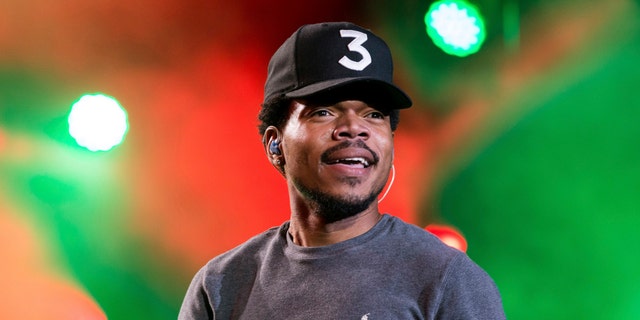 Chance The Rapper performs at The Budweiser Made In America Festival in Philadelphia. (Photo by Michael Zorn/Invision/AP, File)

He also issued a public poll on the matter of “reparations,” which has accumulated nearly 129,000 total votes as of publication with more than 67 percent of responders voting “yes.”

Chance said he was “Disappointed with how this poll is looking but def explains everything thats happened so far today” and responded to a Twitter user that he was simply “upset that over a quarter of the people voting are anti reparations.”

Chance also tweeted that although he “didn’t plan on trending today,” he wanted to use the moment to press that the “City of Chicago and Chicago Police Dept should finally admit to and denounce the assassination of Fred Hampton.”

Hampton, who was active with the Black Panther Party in the U.S., was fatally shot in his bed in December 1969 during a predawn raid led by the Cook County Attorney's Office, the Chicago Police Department and the FBI. Chicago and the FBI settled with a group of nine plaintiffs after a civil lawsuit was filed and most scholars now see his killing as an assasination.

A few hours after the first tweets, Chance seemed to backtrack on his earlier comments, writing: "Whoever you vote for I hope they abolish the prison system as we know it, honor black reparations and all treaties with Indigenous folk and lastly end homelessness. Whomever that may be God bless em"

He also wrote he understands the "improbability" of West actually becoming president, and noted that he realizes some supporters of Biden are not voting for him with much enthusiasm.