While Netflix has been trying (and, in my opinion, mostly failing) to resurrect the romantic comedy, it has also been quietly attempting to reinvigorate a subgenre that studios have spent even less time and money on. When Bridesmaids became Judd Apatow’s biggest-ever hit as producer or director, scooping up enthused reviews and two Oscar nominations along the way, many expected that more would follow, studio comedies that centred on groups of female friends who were allowed to be more than just idealised or demonised girlfriends and wives.

But it’s been a slow slog, with the past decade scattered with just Girls Trip, Rough Night and two Bad Moms films (both clearly, awkwardly written by straight men), leaving Netflix to pick up the slack.

While not exactly slam-dunks, films like Dude, Ibiza, Wine Country, Someone Great and Otherhood have all lightly scratched a growing itch and have collectively provided more entertainment than the platform’s more trumpeted romcom renaissance. Dropping into the middle of an unusually sparse summer season is Desperados, another mixed bag of lewd humour, female bonding and vaguely recognisable actors you liked from that thing you can’t fully remember. It’s imperfect, sometimes frustratingly so, but also just about fun enough for yet another tipsy Friday night locked down indoors, its sun-drenched setting proving alluring and yet cruelly out of reach.

Wesley (Saturday Night Live alum Nasim Pedrad) is not living the life she wanted. She’s in her late 30s, unemployed, single and stealing the food of children she babysits for. When she finds out her ex is getting married, she’s determined to make a sudden friend-engineered set-up work. But on the date, she lets herself be a little too candid and he quickly shares his lack of interest. On her way out of the bar, she trips and is promptly saved by handsome stranger Jared (Robbie Amell). A whirlwind romance ensues, but when Jared goes awol after they first have sex, she’s convinced that yet another guy has ghosted her. With the help of her two best friends Brooke and Kaylie (Anna Camp and Sarah Burns) and far too many bottles of wine, she decides to send a furious email, calling out his perceived bad behaviour as well as his other faults – “Please stop hashtagging all of your Instagrams #photography. Everything on Instagram is a photograph” – but just as the send button is being pressed, she finally hears from him in the hospital. He was in an accident in Mexico which left him in a coma, unable to reach her, and he’s yet to check his phone, which is locked away in his hotel room.

And so begins a frantic, ill-advised trek to Mexico as the three try to find his room and prevent him from seeing just how unhinged Wesley can be. It’s this desire to disguise the real, messy, drunk, angry, irrational you from someone you’ve just started dating that’s one of the sharper observations in a film that too often opts for easy, dumb laughs. After being “too real” with guys and driving them away, Wesley pretends to be what she thinks a man like Jared wants: a passive, salad-eating housewife-in-training who doesn’t ever lose her cool. Jared’s good looks and superficial maturity (“He wants kids and owns a duvet cover”) makes his regressive gender expectations more palatable as well as Wesley’s age and exhaustion at the process of dating. It’s all complicated further when her earlier bad date Sean (New Girl’s Lamorne Morris) also happens to be at the same resort, especially as he’s already seen the real Wesley. 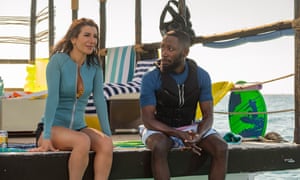 The script, from TV writer Ellen Rapoport, provides Pedrad with many, many opportunities to embarrass herself, but it’s the smaller moments that stick, rather than the more exaggerated physical comedy. Signposted pratfalls, a consistently unfunny running joke about Wesley being a paedophile, and a bizarre scene involving a dolphin penis all prove tiresome, like they were grafted on from a Farrelly brothers film circa the late 1990s. While Pedrad can make for an excellent sketch comic (her Kim Kardashian impression being an SNL highlight), and while there is an easy chemistry between her and Morris (on charming form), she plays too much of the film with a sitcom-level broadness, causing one to wonder what an actor with a more believably specific awkwardness could do with the role. It’s hard not to compare her to Kristen Wiig, another SNL comedian who played a similar can’t-get-her-shit-together role in Bridesmaids, but Wiig is a skilled tragicomic actor able to modulate more delicately between big and small, able to evoke sympathy and laughter in the tiniest of facial movements.

It still zips by with enough energy, because in among the many misses there are still some hits, and its pace is so relentless it’s hard not get swept up. While Camp and Burns are underused, this becomes a smartly handled and rarely crystallised plot point. So often in films within this subgenre, with one central character dominating those that surround them, the friends find their own issues and concerns de-prioritised and for once, this becomes a valid cause of conflict in the third act and it’s the more grounded ideas like this that make the film’s laboured silliness grate that much more.

As sunny, throwaway summer fun, Desperados just about hits the spot although like its main characters, you’d be best spending the runtime with a steady supply of alcohol at hand.