Max Verstappen: 'I love it, the more fights on track with Lewis the better'

Relaxed, smiling and very much at ease, Max Verstappen’s boyish features belie the steel of a man with a singular purpose. Verstappen is in Formula One to win. The Red Bull driver’s manner may be easy, he admits to not overthinking things, but when it comes to this season’s world championship and his determination to fight for the title, his eyes become fixed and his body language forceful. They brook no argument.

“They will always be there,” he says. “My will to win. It’s there all the time. Every single day. I don’t need to worry about that. It is programmed in since I was born. Once I retire, I can relax.”

Nor is this mere psychological grandstanding. In January Verstappen renewed his contract in a lucrative deal with Red Bull until 2023. His blunt attitude to it reflects the scope of his ambition. “I would prefer to be a five-time world champion and earn half of what I would have if I had not won a championship. I am here to win. Money does not make you happy if you are driving 10th.”

With the racing finally ready to resume after the longest period of his career without being behind the wheel, Verstappen is philosophical about the lockdown but now simply cannot wait to get going. “Well, I was bored with not being able to drive a formula one car. But there were so many bad things going on we were really the lucky ones to be safe and waiting for our sport to return.”

The Austrian GP usually boasts huge numbers of Dutch fans who will be noticeable by their absence this weekend. Verstappen says he will miss them but that adapting to F1’s new reality presents no problems. “I really want to get on and race again. It will be weird without friends, family and fans there, but I just want to get back in the car. Once I am sitting in the car I’m fired up, I don’t need the crowds to fire me up.” 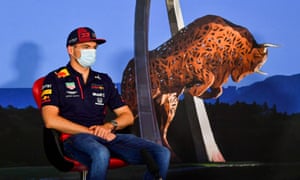 This year, with so many races now compressed into a short time, the pressure will be intense, which Verstappen embraces. He concedes he does not like to talk too much around the sport and finds over-analysis tiresome. “You can talk for hours but if you don’t deliver on the track nobody is going to respect you. I learned that at a very young age and for me that is most important.”

It is worth remembering that when Verstappen says a young age, he means a mere stripling. Aged 22, this will be his sixth season in F1, with eight victories to his name. He has done his growing up in public and it has been compelling. He has weathered much criticism, some undoubtedly deserved. His block on Kimi Räikkönen on the Kemmel straight at Spa in 2016 was rightly castigated. In 2018 there was a clumsy charge on Sebastian Vettel in China, an overambitious attempt to pass Lewis Hamilton in Bahrain that caused a puncture and crashing in practice at Monaco.

Yet there have been sublime moments. Going round the outside of Felipe Nasr at Blanchimont in Spa in 2015; the win in the wet at Brazil the following year; 16th to fourth at Austin in 2017. He turned round the poor start to 2018 as well and last year gave every indication that lessons had been learned. He vied brilliantly with Hamilton to win in Brazil and exhibited great verve battling with Ferrari’s Charles Leclerc at Silverstone having already displayed forthright determination in muscling past the Monegasque and the rest of the field at Austria to take victory.

This was a season of a campaigner making the most of a car that was often only third quickest, yet one which he returned to third place in the championship. This year he has every reason to expect more. Red Bull looked competitive in testing. Their car was fast from the off and concerns that it may have some rear instability were dismissed by Verstappen. He was, he explained, just pushing the limits.

Verstappen was taking great pleasure in a car he feels is potentially the best he has been given at Red Bull, indeed the first for him that can perhaps challenge for the title. Red Bull are on a roll and their team principal, Christian Horner, believes his man is now the complete package, ready to take on Hamilton.

Verstappen may be 13 years Hamilton’s junior but there is not even a hint that he is intimidated by the world champion. Earlier this year he avowed that given the right machinery he could beat Hamilton. The British driver countered, calling such claims a sign of “weakness”. 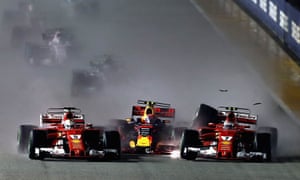 Verstappen is sandwiched between the Ferraris of Sebastian Vettel and Kimi Räikkönen at the Singapore Grand Prix in 2017. Photograph: Lars Baron/Getty Images

How would Verstappen like a blow-for-blow battle, then? His response is to lean forward, gimlet-eyed, and demand that the sooner the seconds step out the better. “I would love it,” he says.

“That’s not pressure, if you’re winning that is the best thing there is. I love it, the more fights on track the better. I would love to have that competition and close fighting and the chance of fighting for a title. There are moments where it will be hard but I like that and Lewis likes that as well.”

Hamilton, it has been argued, must be destabilised to be put under pressure as Nico Rosberg did in 2016. Perhaps a real fight to the wire will be enough to do so but more may be required. Verstappen, however, sees no need to play games. The will to win is all.

“I don’t need to take Lewis out of his comfort zone. As a driver you have to believe in yourself. It’s not arrogant because if you don’t believe that you will ever succeed, you have to be confident you can do it.”