Leroy Sané has completed his move to Bayern Munich from Manchester City, joining the German champions in a deal worth an initial €45m (£40.9m) plus add-ons.

The 24-year-old has signed a five-year contract with Bayern after the two clubs agreed a deal that should quickly rise to €49m (£44.1m) through achievable add-on fees. The total value of the transfer with all additional fees is thought to be €60m (£54.1m).

“Bayern is a great club with big goals – and these goals suit me as well,” Sané told the club’s official website. “I’m looking forward to the new challenge and can’t wait to train with the team. I know [Bayern manager] Hansi Flick from the [German] under-21 national team, we had a very good relationship there. I want to win as many trophies as possible with Bayern, and the Champions League is the top priority.”

Bayern’s CEO, Karl-Heinz Rummenigge, said: “We’re very happy to welcome Leroy Sané to Bayern. He is an outstanding player who has proven his qualities over the past few years, especially in the national team. Our goal is to gather the best German players and the signing of Leroy emphasises this goal.” 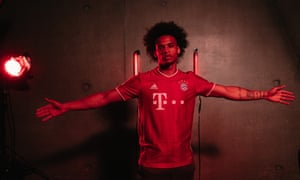 Leroy Sané has said the Champions League is ‘the top priority’ for him at Bayern. Photograph: M Donato/FC Bayern/Getty Images

Sané posted a message to City fans on Twitter soon after his departure was confirmed. “Thanks to all the fans, the staff and my teammates! I will always remember this time with joy and pride,” the Germany international wrote. “I’ve learned a lot and I’m very proud to have been part of this journey.”

“We wish Leroy all the best in this new chapter of his career,” Pep Guardiola told Manchester City’s official website. “Leroy has been part of one of the most special periods in this club’s history, and he leaves with the best wishes of everyone here.”

Sané joined City from Schalke in August 2016 and enjoyed a successful spell at the Etihad Stadium. He won two Premier League titles, an FA Cup and two League Cups in England, as well as the PFA young player of the year award in 2018.

The winger’s final season at City was blighted by a serious knee injury, picked up in the Community Shield. His only first-team appearance since was an 11-minute cameo from the bench in the recent 5-0 win over Burnley.

Guardiola’s squad requires a rebuild but a replacement for Sané may not be a priority. The emergence of Phil Foden and Riyad Mahrez’s improvement mean defensive recruits are more pressing. Bayern’s David Alaba and Napoli centre-back Kalidou Koulibaly are both thought to be among his targets.