Two goals by John Fleck and a botched penalty by Jack Grealish decided this match and, more broadly, encapsulated the different paths these clubs have taken since promotion. Ten months ago they met in the Championship but now Chris Wilder’s men are in the early jostling for European qualification while Villa are in danger of dropping back into the second tier.

Villa have lost six of their last eight games and need to reverse that form quickly. After Tuesday’s Carabao Cup quarter-final against an improvised Liverpool team they will resume their quest for Premier League survival by facing Southampton, Norwich and Watford before New Year. They had better not play like they did here.

“I’m annoyed because we’re better than we showed,” said Dean Smith. “We never managed the ball as well as we could have with the cultured players we’ve got.”

One reason why United have coped better in the top flight is that Wilder has had to make fewer changes than Smith since promotion. Villa, after a summer of heavy investment, began here with only two of the players who featured in the draw between these sides in February, whereas United started with eight survivors from that game. Not all of Villa’s recent additions have thrived, with Wesley, low both on confidence and useful service, looking forlorn here before being withdrawn in the 70th minute when Villa were in urgent need of a goal. “He took a whack in the lower back and I thought Jonathan Kodjia deserved an opportunity,” Smith said.

United, by contrast, are a team with exceptional cohesion and no obvious shortcomings. For all that, the first half here was appalling, like a re-creation of some skirmish from the nether leagues. Neither goalkeeper had a shot to save.

John Lundstram did poke an effort towards goal before the break but it was blocked by Kortney Hause. That intervention may not have been necessary because it was questionable whether the shot from 16 yards had enough power to make it as far as the goal but at least the defender was well positioned, which was worth noting as the 24-year-old was making his Premier League debut in the absence of the injured Tyrone Mings.

Given how Villa were torn apart by Leicester last week, Smith took a measure of satisfaction from how few chances his team gave up in the first half here, even if that was partly down to United being uncharacteristically slipshod.

Villa’s attacking was lamentable. Henri Lansbury, making his first league start of the season, made little impact while Grealish and John McGinn were unusually quiet. The main cause of the crabbiness that sidled into the game was probably both sides’ frustration with their own inadequacies. 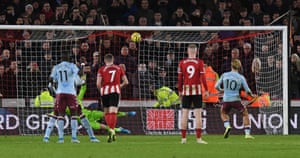 Wilder must have vented grievances at half-time because his players emerged on a mission of atonement. David McGoldrick should have put them in front when he ran on to a cross from the right by Ollie Norwood but the striker miskicked from close range. Fleck made no such mistake in the 50th minute, when he scampered unnoticed into the Villa box to sweep the ball into the net from 12 yards. The buildup to the goal was lovely, with Lundstram teeing up his fellow midfielder after collecting a foxy back-heeled pass by Chris Basham, a centre-back whose repertoire extends even beyond overlapping.

Villa attempted to reply. When Anwar El Ghazi at last gave Wesley decent service, the striker did well to hold off John Egan before shooting into the sidenetting from the corner of the six-yard box. El Ghazi provided another good delivery moments later but Grealish was unable to turn his cross into the net, nodding wide at the back post.

Then Villa, so solid in the first half, dissolved again and Fleck ran into the box to score his second goal, lashing home after a canny reverse pass by McGoldrick. Villa were given hope when VAR ruled that Egan handled the ball in the box but Grealish blasted the penalty against the bar. After that Villa were bereft.